Cooking up some Springtime

There are a lot of recipes that show up on my FaceBook feed. I tried this one this morning:

"This delicious breakfast snack will have your kids crying for more! It's an apple-studded pancake that you bake in the oven. Once it's done, cover it in syrup for a delectable breakfast treat! Here's what you'll need:
- 6 eggs
- 1 cup whole milk
- 2/3 cup flour
- 1/2 tsp salt
- 3 T butter
- 3 large apples sliced
- 1/4 cup brown sugar
- 1 tsp cinnamon
Beat eggs, milk, flour and salt together until fully combined. Preheat oven to 425, and in a medium sized glass pan add apples and butter. Once the butter is sizzling, it's time to add in the batter. You can also add the brown sugar and cinnamon to taste, then let it cook for about 20 mins.
That's all it takes! Top with syrup or your choice of toppings and enjoy!"

The recipe is a bit sloppy. First off, it isn't really as much a pancake as it is an egg bake. It says to use a medium sized glass pan. What is medium? I ended up and used my glass cake pan that is just a hair under 9"x13". It doesn't say how long before the butter is sizzling. I timed it to just under 20 minutes. It also doesn't say how to incorporate the brown sugar and cinnamon. I sprinkled mine on top of the apples, before putting the batter over all.

Here are photos of the process:

I tested the recipe out on two teenage boys and an older woman. It was ok, but not something I would rave about. I think I would use fewer eggs and chop up the apples. I was concerned that the center wasn't cooked through. It was, but with fewer eggs, I think it would be been more consistent. The center was lighter; more fluffy, and the outside edges were tougher.
Tonight we are trying another recipe from FaceBook friends. This one will be a chicken bake. I will try to remember to review that one too!

Spring is so pretty around here. The daffodils are done blooming and the hyacinth blooms are dying back. The irises are exploding now! They are so pretty!
Indoors we have an Easter Lilly that will be transplanted outside. My Mandavilla broke off during a recent storm and I am trying to root the broken part. That is it there, under the plastic baggie. 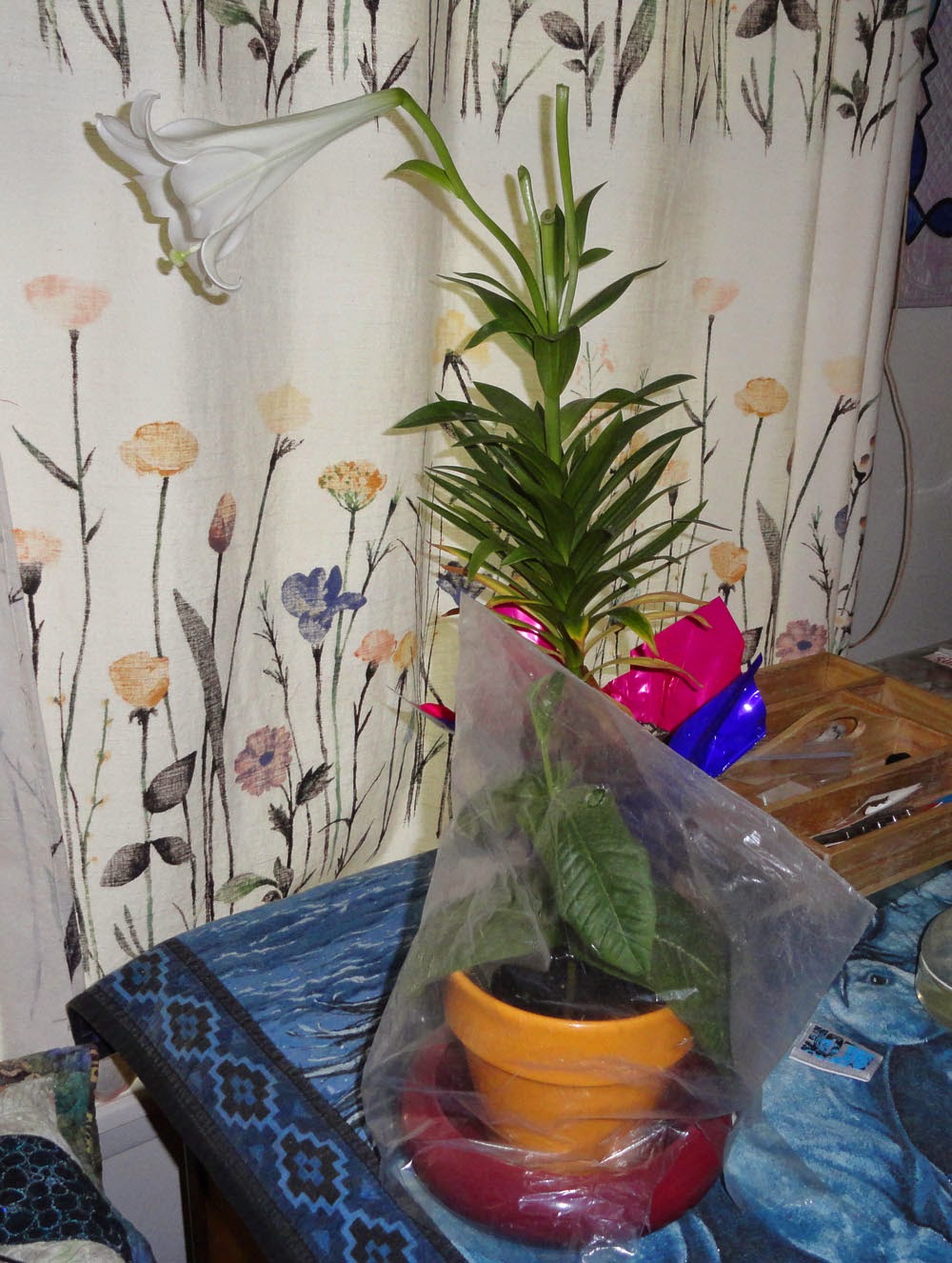 More flowers are blooming in the studio! I have block number two done for the Folk Art quilt: 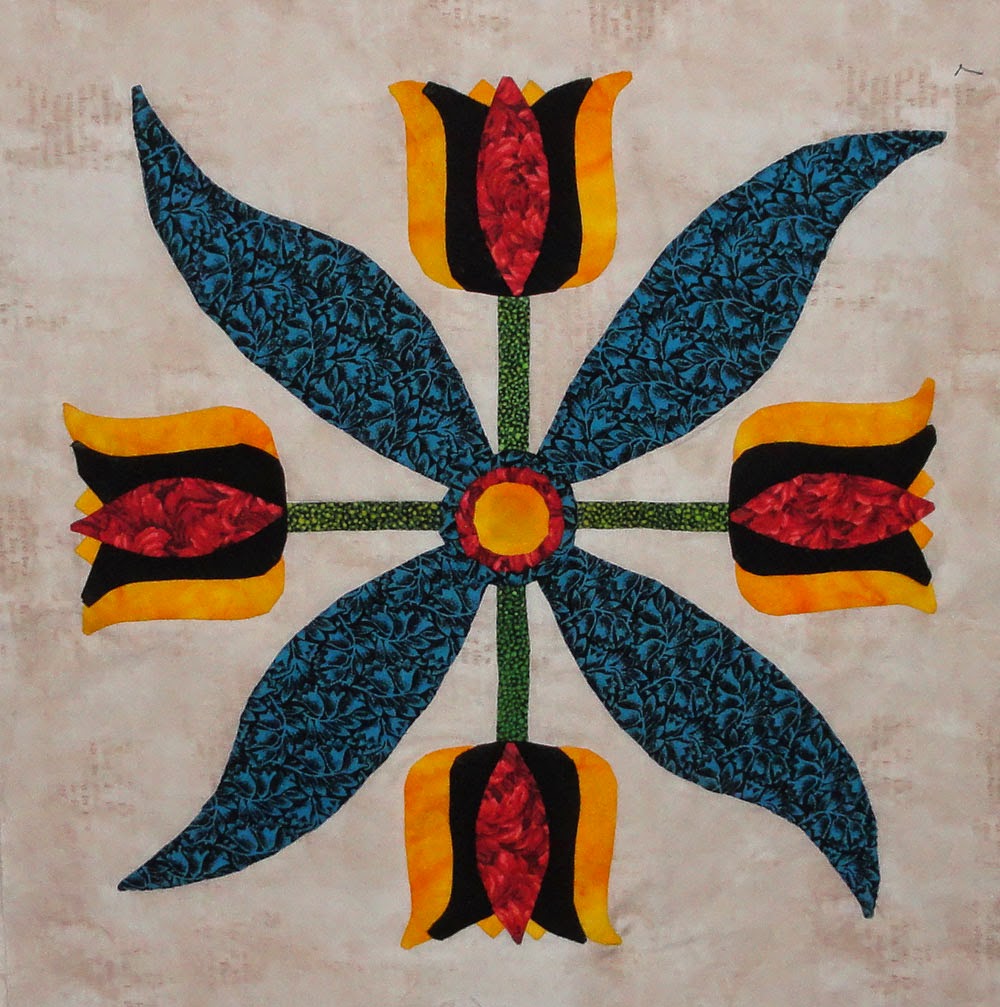 I have pieces cut out for block three, 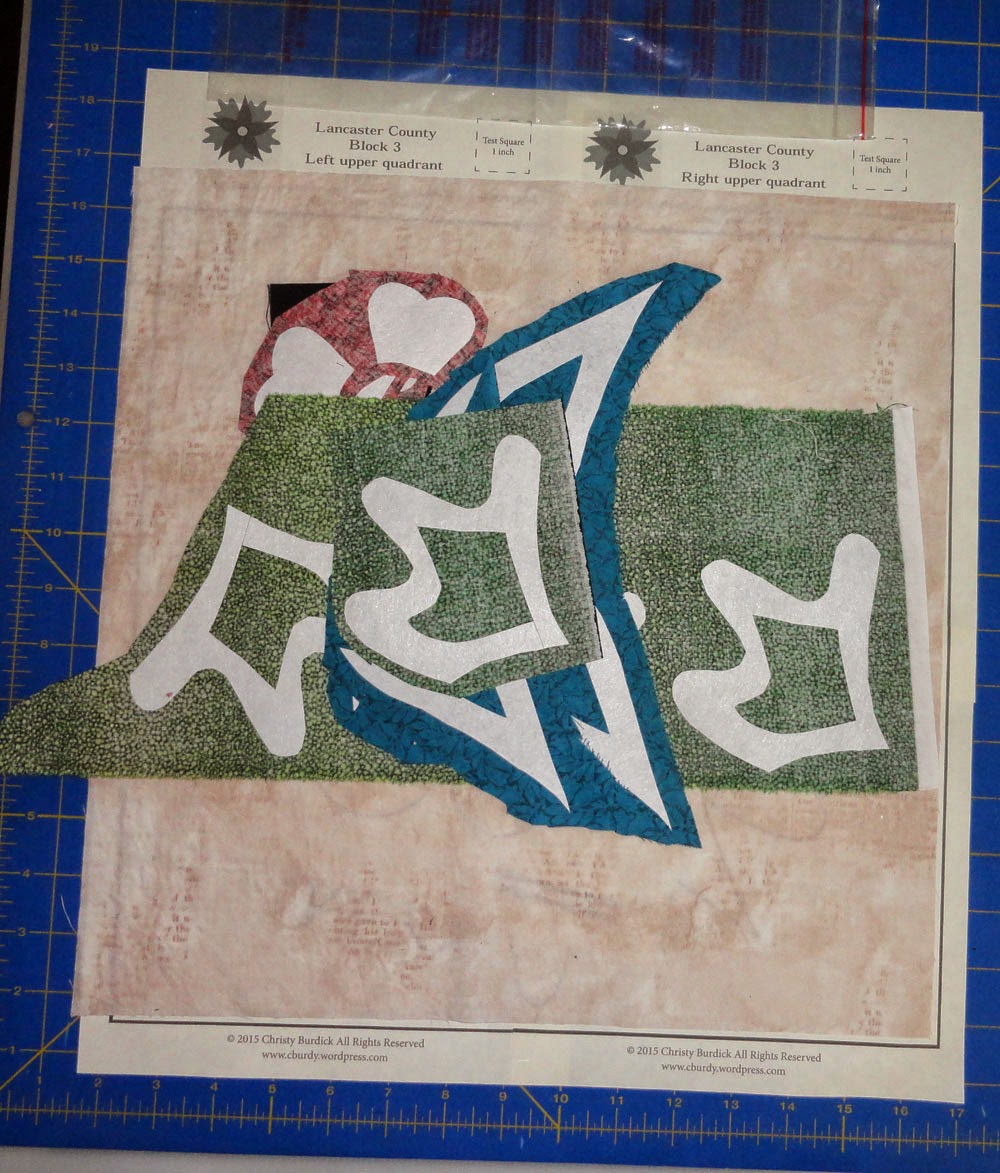 and stems for block four. 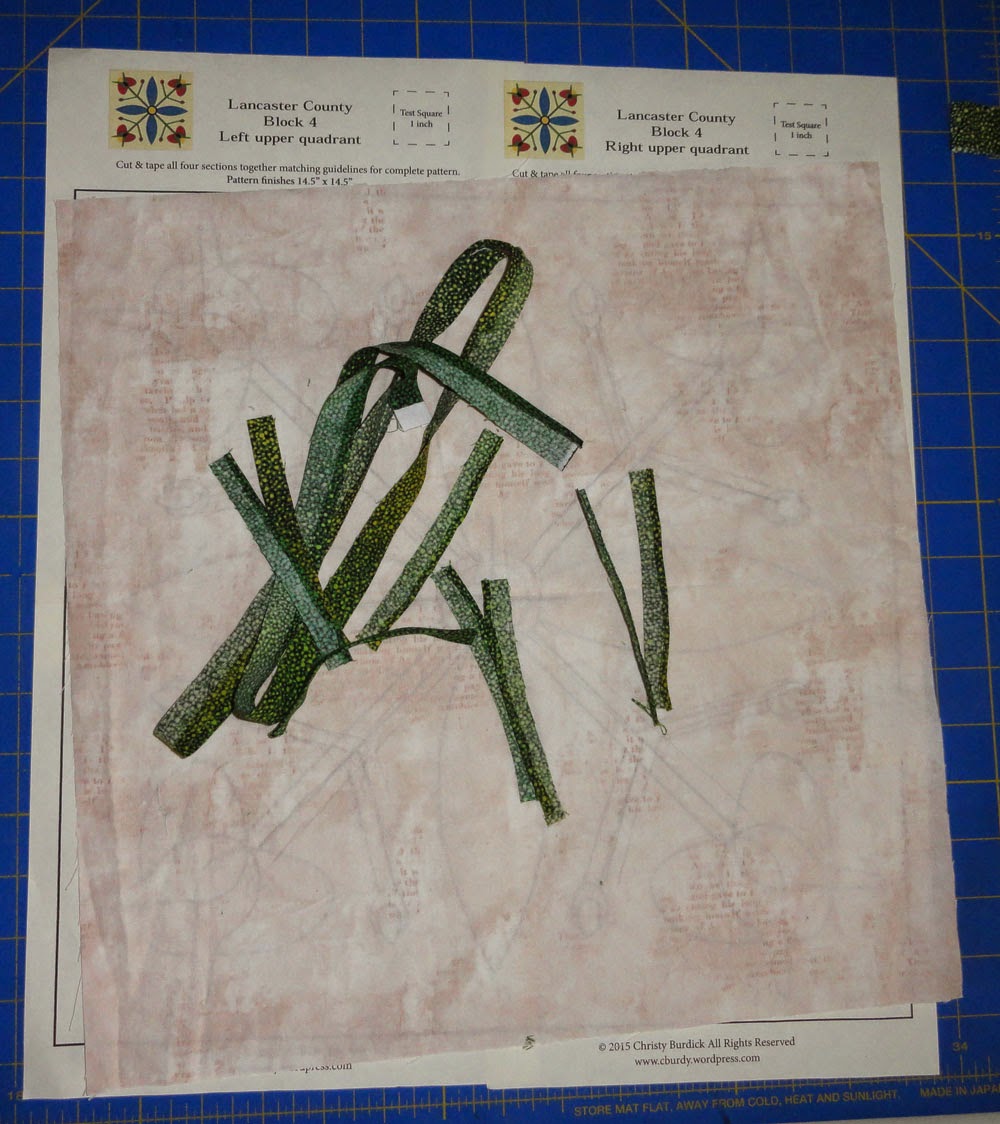 Ruby Crystal is in the stack for hand sewing: 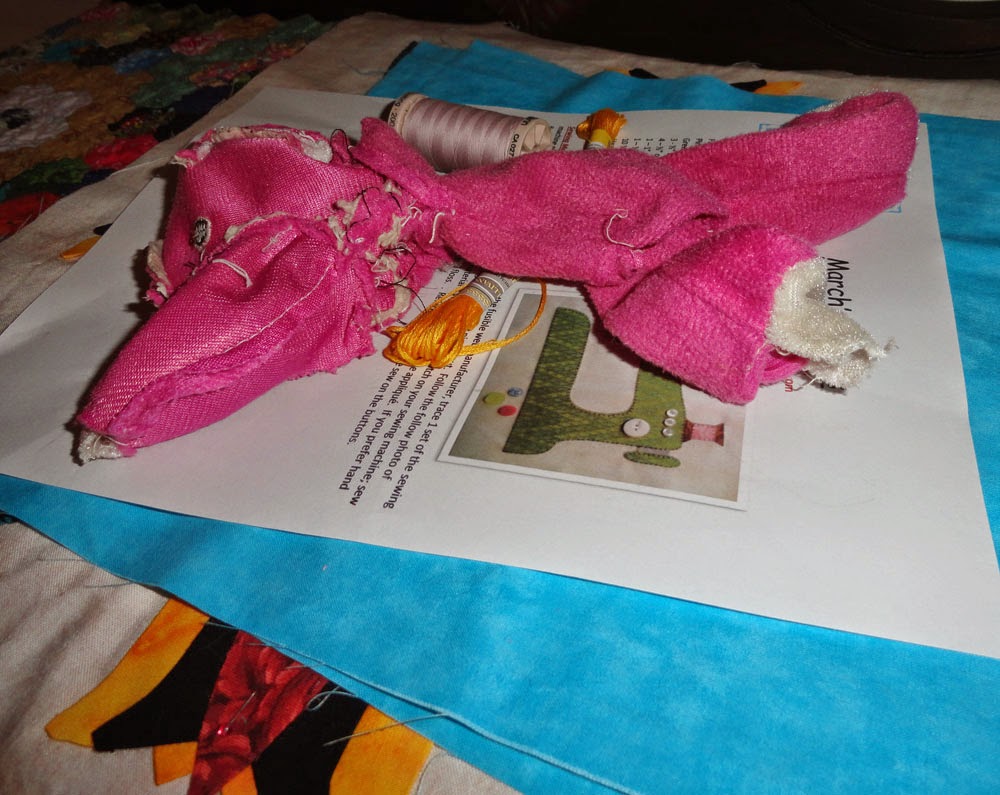 The Sherbet quilt is making progress:
I now have orange sherbet and raspberry sherbet colors.
What next? Why lime sherbet, of course! 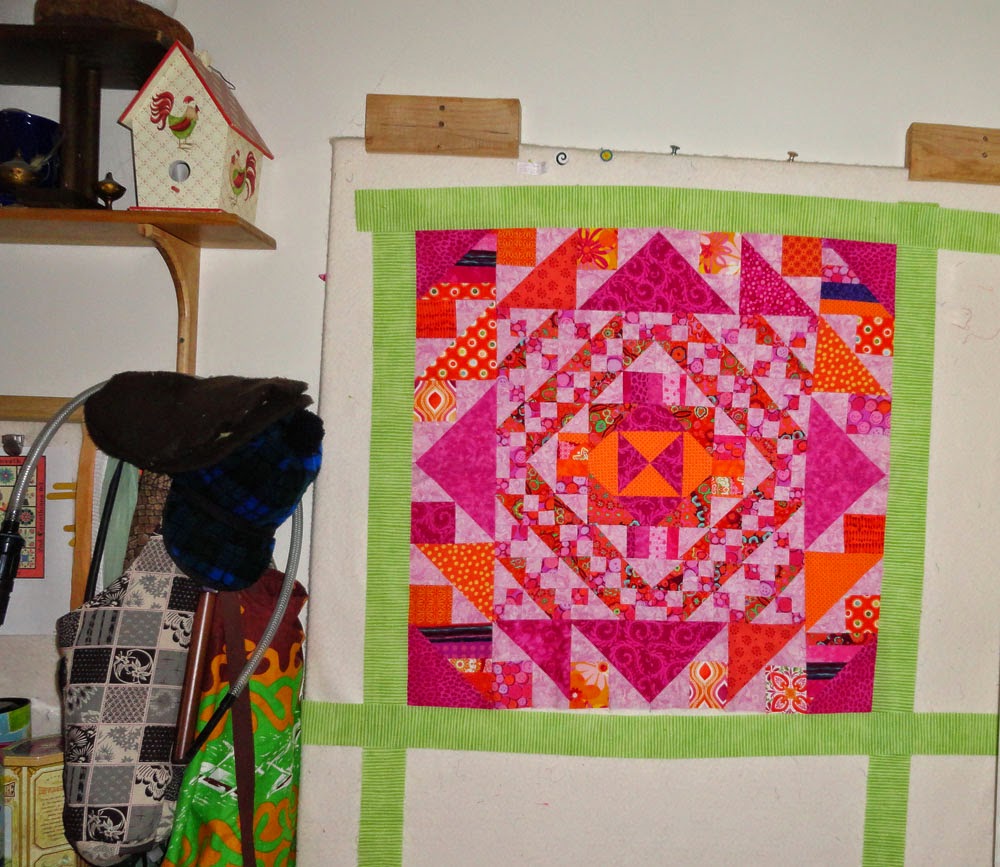 Phew! This has been a posting full of photos!!! I hope you enjoyed them all. Tomorrow will be my monthly guild meeting. I am looking forward to it. Time to get some housework done. Funny how the guys expect clean undies and food during the day! hahahaha

WOW! Your pink and orange blocks are fabulous! I definitely like the green with it. Now I know what you meant by riot of color. ;-)

Thanks for the review of the apple bake recipe. I am usually too lazy to make the FB recipes, but the one you reviewed sure sounded tasty. Your comments made me think of writing a pattern and how some of us need more direction than others (use a 9x12 cake pan NOT use a medium sized glass pan.

Thanks for stopping by Jaye! The fabrics certainly are not my colors. They were already made into patches and put in a baggie on the give away table at my last guild meeting!
I sure am having fun with them though. I may have to buy more fabric in such bright colors!!!

Walker Lady is on vacation until further notice

Jingly Bits CD only $5 plus shipping!

"Clara the Cow" by Tommy

Sherri
I'm the 'Lazy Quilter' who doesn't always take the time to try to achieve perfection. I prefer to enjoy the process of creating instead of agonizing over being perfect. I wear the hats of a Quilter, Artist, Crafter, Musician, Wife, and Mom, all rolled up into one unique human bean!